What were the mens and womens tennis shoes worn during the US Open Tennis tournament for 2015? Now, that we have caught out breath from all the excitement that has gone on during the 2 weeks we will reflect on the the shoes worn by both men and women tennis players that reached the latter stages of the tournament.The brands represented range from Nike and adidas to ASICS and Li-Ning.

Wow, what a final result. While we were all thinking about how nice it would be for history for Serena Williams to win the calendar year grand slam, she didn’t make it to the last step. Instead we were treated to 2 first time grand slam finalists, who grew up together and played a different style that what we expected. Flavia Penneta used her backhand down the line to beat her countrywoman, win the US Open and announce her retirement. The shoes that brought her to her first grand slam title were the adidas Stella Barricade. They were the perfect addition to her cool grey and blue business like tennis outfit. Flavia surely did take care of business during this tournament!

Obviously, Roberta Vinci had a great US Open. Her trip to the final will always be highlighted by beating Serena WIlliams, stopping her quest for history. Her one-handed slice backhand, which on average bounces 2 inches off the ground left all of her opponents, including Serena off balance. It was great seeing her and her childhood friend Flavia Penneta have a great time during the trophy ceremony. The shoes she wore to grand slam finalist glory were the Nike Women`s Zoom Vapor 9.5 Tour Tennis Shoes in Volt and Wolf Gray. The color combination gave a flashy tennis ball like glow to her feet, complimenting her rose colored outfit.

He made it into double digits with this grand slam win. He had to endure a reinvigorated Roger Federer who managed to win a set during the final. He endured his opponent and a rain delay to win grand slam 10 in his adidas Barricade Novak Pro tennis shoes. They were a perfect match to his smartly styled dark blue polo shirt combo from UniQlo.

The men’s side of the draw ended up with 1 taking on 2 – the perfect ending, but not for Roger. He gave his all against Djokovic but in the end Novak was just too good. Nevertheless, he made it to another final and put in a very good performance. Maybe he can get over the hump one more time and win one more grand slam tournament before he retires. The shoes that brought him to the 2015 US Open Final were the Nike Men`s Zoom Vapor 9.5 Tour Tennis Shoes Hot Lava and Black which were the perfect compliment to his white and Hot Lava tennis outfit.

Serena was trying to make history during this tournament. She was going for the calendar year grand slam by winning this US open. Unfortunately for her, Roberta Vinci outplayed her in the semi-final and ended her quest for additional history. She can look back on her year and will be very satisfied that she has won 3 of the 4 grand slams, and ended her boycott of the Indian Wells tennis tournament, which has endured her to even more tennis fans. The shoes that she wore for her historic quest were the Nike Court Flair tennis shoes.

Simona came in a bit shaky from the summer hard court season. During the US Open Series, she had to retire from a final  and was nursing injuries throughout the whole summer. She displayed tremendous fight by getting to the semi-final. She had some tough matches along the way but could not get past a determined Flavia Penneta to make it to the final. The shoes she wore during her run to the semi-final were the adidas Adizero Ubersonic Tennis Shoes.

Stan the man has had a pretty good year. He beat Novak Djokovic to win his 2nd grand slam at the French Open. He also had some deep runs during the other large tournaments this year and was able to persevere, despite all of the on court drama he had to deal with over the summer with Nick Kyrigos.  He managed to get to the semi-final of the US Open with his tried and true Yonex SHT-Pro EX Tennis Shoes.

He is known for his great looking one handed backhand. This year has been up and down for him but was able to turn it up during Wimbledon and the US Open. He had a big win over Tomas Berdych and reached the quarter final where he was beaten by the other maestro of tennis, Roger Federer. The shoes he wore during the US Open were the ASICS Gel Challenger 10 Men’s Tennis Shoes.

His big serve got him far during this tournament. Cilic has been recovering from injury this year but still managed to have a pretty good summer and attempt to defend his 2014 US Open Champion points. He made it pretty far, but was stopped in the semi-final by the eventual champion, Novak Djokovic. The tennis shoes he wore during the tournament were the White/Blue/Crimson version of the Li-Ning Open Marin Cilic Team Tennis Shoes. 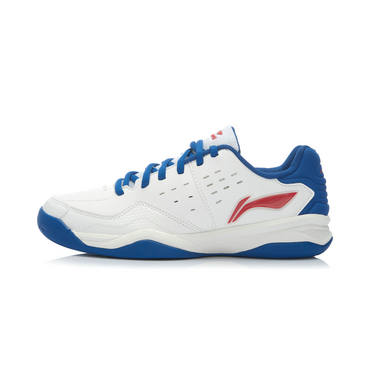 **This post contains affiliate links and we will be compensated if you make a purchase after clicking on our links.

Infographic: Sneakers by the numbers in America - PBS NewsHour (blog)

“Thrilla in Manila” Boxing shoes - How have Boxing Shoes Changed?

What Is Platform Tennis?

What is Paddle Tennis?